When we heard a new Indian restaurant Basmati had opened in Annapolis, we quickly turned on our GPS and headed toward the state capital.

We were glad to hear about Basmati because Annapolis previously had only one Indian restaurant. Hey, competition is always good for customers.

When we entered Basmati Annapolis around 11:45AM, just two tables were occupied. By the time we left, the restaurant wore a busy look with about two dozen diners.

We were greeted by a tall, thin waiter and quickly ushered to a table.

There is a bar in front of the main entrance, the lunch buffet station is to the right and the cash counter on the left.

Our table was clean and silver was placed neatly on a papermat along with a black-colored cloth napkin.

As we were settling down, a waiter came and filled our water glassess.

To put it succinctly, much of the food we sampled at Basmati's lunch buffet was a travesty of Indian cuisine.

Be it vegetarian or non-vegetarian entress, Basmati's kitchen is an equal opportunity offender and unleashed a merciless fussilade on our taste buds.

Not a single item on the lunch buffet stood out in any noticeable way.

Indian curries derive their magic from the fine array of spices that are used in their preparation.

By dumbing down on the spices, Basmasti's lunch buffet deprives you of the magical and divine experience of eating Indian food.

Instead of subjecting your taste buds to Basmati's kitchen, you'd be better off picking up curry packets from the nearby Trader Joe's store on Jennifer Road.

BTW, we were not the only disappointed souls with Basmati's spiceless travesty.

At our adjacent table, a middle-aged White diner summoned a waiter and requested hot peppers.

Adding insult to injury, much of the food at the buffet station was either lukewarm or cold.

Mind you, this was within 15 minutes after Basmati had opened its doors. 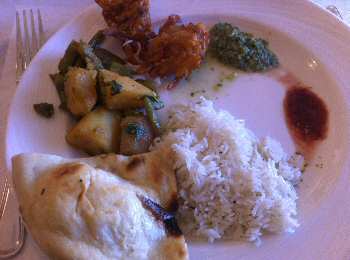 Rice Pudding was the sole dessert on the lunch buffet. 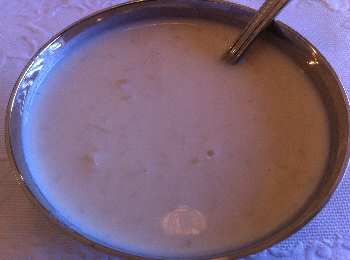 OK Rice Pudding
Basmati's Rice Pudding fell in the OK category but we&#39d prefer it a little more thicker and with some Pistachio powder dressing for added flavor.

Also, when the lunch buffet costs $10.95 we think there ought to be at least two desserts. Say Gajar Halwa or Gulab Jamun.

Folks, it's not just the curries that were mediocre at Basmati.

Even the water they poured from a glass jug into our glasses had a strong smell of Chlorine.

Sure, the waitstaff greeted us, seated us promptly and removed the used plates with alacrity.

But what irritated us was their attempts to hurry us through our meal.

Twice, our waiter asked us whether he could remove our plate while we were stll eating.

Basmati Annapolis serves some of the most spiceless and tasteless Indian curries we've had the misfortune of putting into our mouth in recent days.

All in all, we did not consider Basmati Annapolis's lunch buffet to be value for money.

It's unlikely we'll be returning to Basmati Annapolis any time soon. - © MDIndia.us